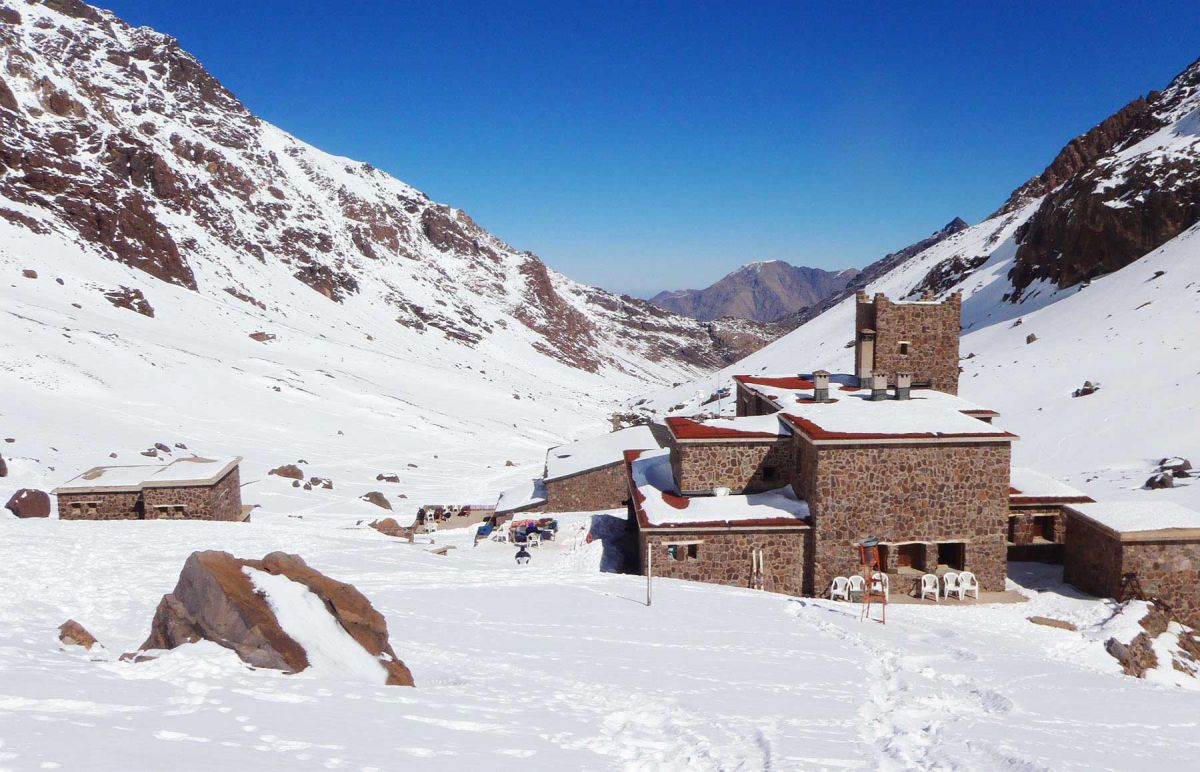 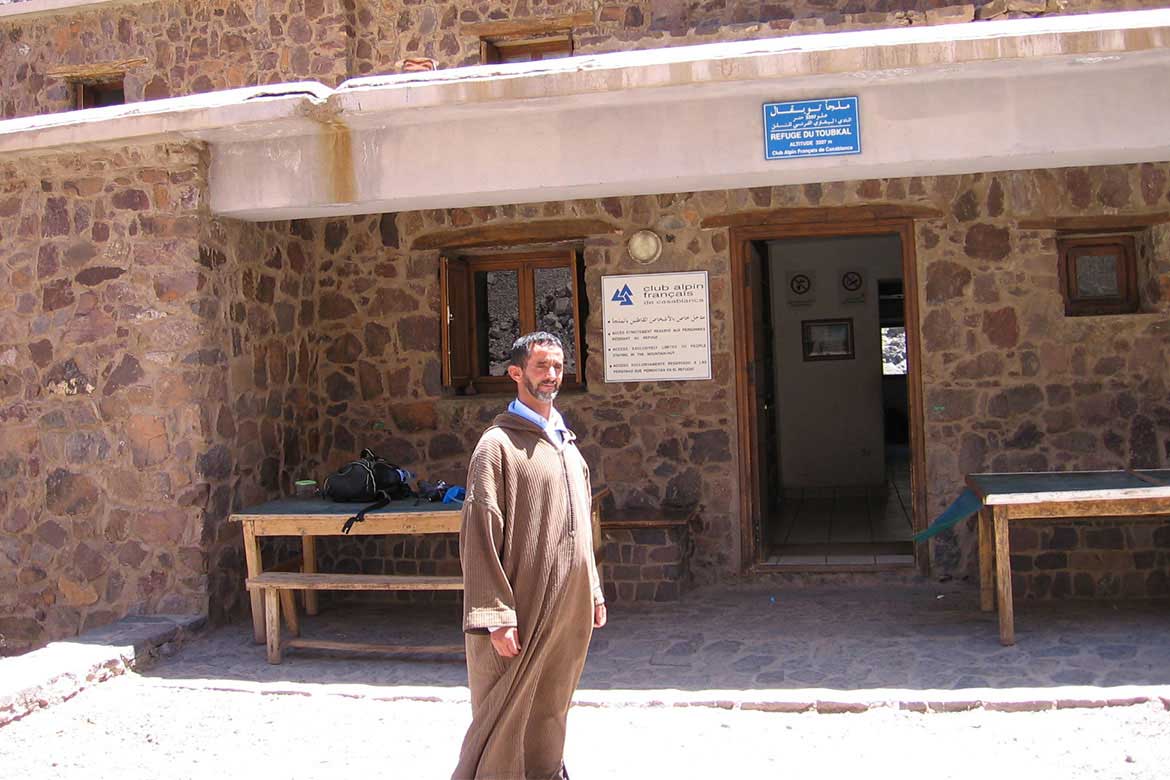 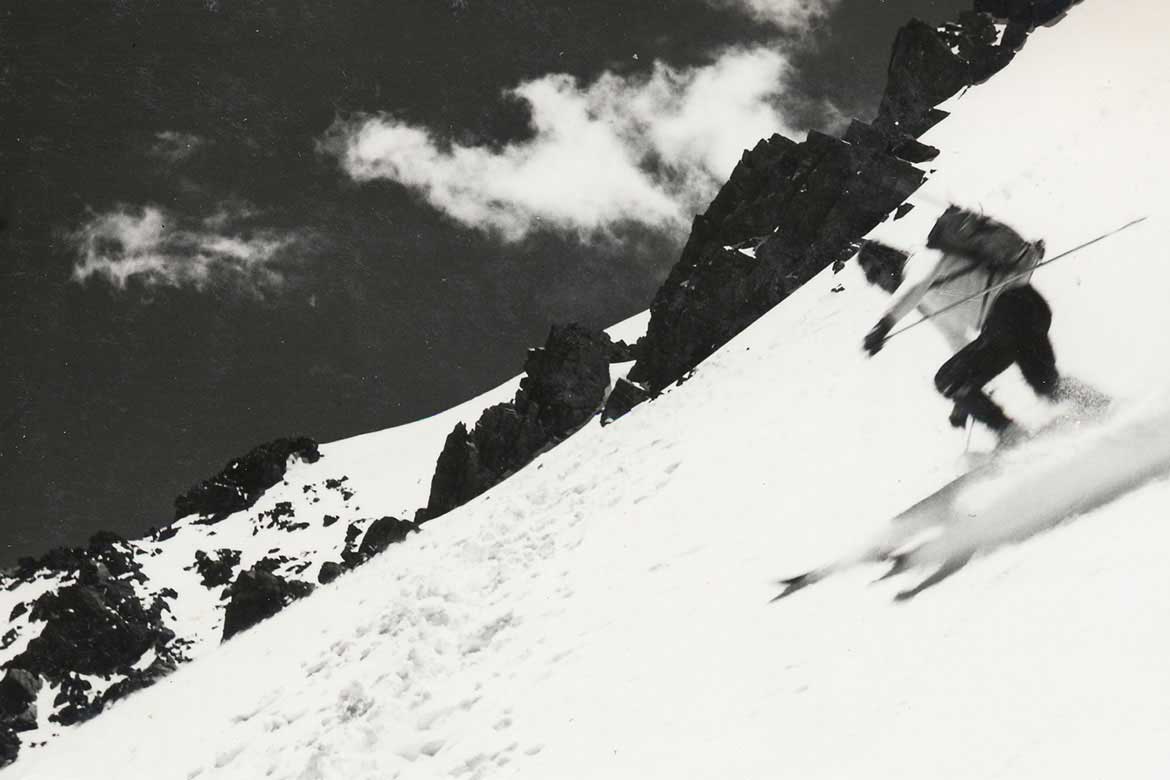 History Following the first incursions'' tourist'' in the High Atlas (late 19th Century), after the First World War alpine activity develops in the Toubkal Massif. Thus in 1922 a small elite of French climbers created section of the High Atlas Moroccan French Alpine Club. Only recognized in 1922 as the highest peak in the High Atlas and North Africa, Jebel Toubkal (4167m), Adrar-n-Drer (mountain mountains) in Amazigh, was climbed in 1923 by the Marquis de Segonzac, Vincent Berger and Hubert Dobeau. Of course, it was only the first'' Tourist'' CAr long as there were people in high valleys had graced the top they topped kerkours small (small pile of stones with a meaning symbolic-religious). Therefore, the systematic exploration of massive was undertaken by mountaineers CAF but also by many scientists responsible for the administration of the Protectorate inventory these regions. the idea of having a fixed base at the foot of the northern slopes of Toubkal quickly established.

'' Refuge'' Issougan not ouagouns (named azibs local ie temporary habitats used by mountain shepherds and transhumant) was built during the summer of 1938 at the foot of the South Ighibi , normal route of ascent of Toubkal, at 3207m above sea level on the left bank of the Assif Ait Mizan not. The building (pictured) soon took the name of its principal benefactor, Louis Neltner, shiny géoloque and mountaineer, charged at the time of draw maps of massive Moroccan. In 1987 the CAF section of Casablanca, after the war became manager of all accommodation located in Morocco, gave him his current definition, Toubkal refuge.

With 17 berths, the common room and single WC, former Neltner refuge answered for twenty years at the request of mountaineers and skiers passage. But in the late '50s the Toubkal opened to international tourism. The area is often saturated, despite the installation of Toubkal opened to international tourism. The area is often saturated, and despite the additional installation of a dormitory in 1973, the situation became untenable now. In 1997 the architect Claude Verdugo its proposed restructuring project refuge after a summer of work, November 22, 1999 the new refuge of Toubkal was opened to the public, as it is currently presented (86 beds tourists, 20 beds mule ). Micro hydro-electric power for the electric refuge of Toubkal After renovation the refuge of Toubkal now has all the amenities of a modern refuge, it is spacious and comfortable and is very popular with hikers and mountaineers accustomed to comfort shelters europe.

Its architecture and layout of the buildings were designed to fit the particular nature of the massif of the High Atlas and respect the traditional Berber habitat. This project has been studied by specialists in this specific type of electricity production in high mountains.

Power plant (3 KW) has been chosen to reflect the best available water resources on the site and energy needs of the shelter. The total cost of the project: micro center, infrastructure, control equipment and control installation, is estimated at 30,000 Euros, 15,000 have already been funded by the French Alpine Club for the implementation of infrastructure intake water, penstock and cab turbo generator. This plant will finalize the restructuring of the entire refuge and allow new buildings to have a clean, natural energy.